Valuing the meat we eat

Posted by bspencer in Food, Green & sustainable living on 6 February 2013 -

A new year and food issues are very much in the news again. During January, we’ve seen widespread coverage over concerns over traces of horsemeat found in supermarket burgers; elsewhere, a report by the Institute of Mechanical Engineers has highlighted again the amount – and cost – of food that is wasted.

Running alongside these has been the launch of the joint charity ‘IF’ campaign, which is seeking to highlight the fact that hunger and inequalities in the global food system can be addressed with the right combination of political leadership and behaviour change.

But is there a common thread linking these?

Looking at the value of the meat we eat from variety of angles from a variety of viewpoints. © Steven Van Vaerenbergh

Arguably there is one, and that is the need to value the food we eat. This is the main finding of a new report by WWF-UK and the Food Ethics Council focused on one small aspect of the food system – meat consumption. The report, Prime Cuts: valuing the meat we eat, examines whether reducing meat consumption in high consuming countries, and instead eating better quality meat, could be beneficial for people’s health, the environment, and for producers and consumers.

High meat consumption is seen as a factor related to a number of challenges facing the global food system, including climate change, obesity, water scarcity, land use change, global poverty and inequality. However, a simple ‘eat less meat’ message is over simplistic. Producers and primary processors raise legitimate concerns about impacts of reduced meat production on their businesses, and politicians remain wary of industry and public reactions to the message. 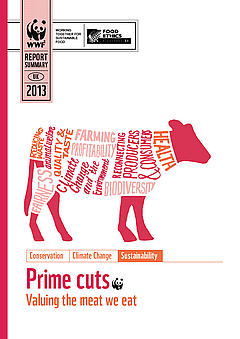 
Prime Cuts is a first step at defining what a ‘less but better’ approach might look like. Using this approach so people value meat more allows us to consider many other aspects of meat production and consumption, including animal welfare, biodiversity, farmers’ profitability, taste, waste and broader health issues.

It also provides an insight into where the win-wins and trade-offs may be. Although only a short study, our report suggests that, with focused discussion and government-led engagement and research, this approach may be worth pursuing.

Clearly it’s not the only aspect of the food system which needs to be considered. Prime Cuts is the last in a series of reports that WWF-UK and the Food Ethics Council, sponsored by the Esmée Fairburn Foundation, have produced looking at different aspects of the food system.

Other reports have considered the role of retailers and producers and Government, the impact on farmers and the implications for consumers of making our food system more sustainable.

All of these areas are complex but two points come through repeatedly.

One is that, due to the inherent complexity of the food system, it is impossible to expect one part of this matrix – such as Government, or retailers, or famers – to take sole responsibility for ‘fixing’ problems related to sustainability.

The other has already been mentioned; we need to place a high value on what we eat, meat included. Simply viewing food as a disposable commodity is just not possible any more.

More articles by this author

More on this subject

Hot articles around the blog

Ten products and ingredients that come from the Amazon.

The Amazon is much more than simply a beautiful, far-off tropical rainforest. It’s also a source of everyday items we rely on. Do you recognise these familiar products and ingredients? Chocolate Did you know that your favourite chocolate originates from the cacao plant? This grows wild in Central and South America and cultivating it can

10 reasons why we should all care about climate change

We’re all concerned about climate change, but when it looks like a problem for future generations, you ask yourself, ‘will climate change even affect me?’ No matter what you care about, climate change is already affecting our world today. While we still have time to limit the worst impact, here are ten great reasons to

For me, Emperor penguins are the iconic Antarctic species. When I first saw them on the ice, I was struck by their serene grace and intricate beauty. Delicate gold patches adorn their chest like an artist’s brushstroke against their otherwise black and white plumage. No other species is so perfectly adapted to survive in the

Here in the UK

Children are the real stars of WWF's Earth Hour

Earth Hour is fast approaching and as the Communications Manager for WWF Cymru my life seems to have been taken over by stars! During the last month I’ve met stars of all shapes and sizes from Hollywood actors to international rugby players, from politicians to school children – all are supporting Earth Hour and our

10 reasons why you should visit our panda-tastic Experience

Saturday 25 January 2014 was a pretty significant day for WWF-UK. Having moved into our fantastic Living Planet Centre back in October 2013, we finally marked the public opening of the WWF Experience! Let me take a few steps back to explain. The idea of the Living Planet Centre was born when long standing supporter

Posted by Guest blogger in Campaigns, Forests, Habitats, Helping save the planet on 7 April 2014

For a month last autumn, Freddie Flintoff and I pedalled along what is perhaps the most controversial road in the world. The Trans-Amazonian Highway was built by the Brazilian military dictatorship in the early 1970s, to open up the southern Amazon basin for colonization and economic exploitation. In a grandiose economic experiment, the proposal was